Ecosystems, Diversity, and the Wilderness Experience

A man pulls into a trailhead. He’s been hiking here for years, but back when he started there weren’t nearly this many people. He snags one of the last parking spots, thankful he knew to get up as early as he did to get here in time. No extra walking would be added to this trip. He fastens his gaiters and pulls on the Osprey pack, then picks up a piece of trash on his way to the trailhead.

As he’s tucking it into his pack he glances over at a family in jeans with plastic water bottles trying to get their things together; they look like city people. He shakes his head and takes an inventory of their gear: cotton T-shirts, sneakers, Jansport packs, and wooden hiking staffs. His mind drifts back longingly to a time when it was just him and his dad up here climbing the big peaks — when the people he saw were all like him, who learned from people like him, and came out prepared.

He grabs his trekking poles, hoping he can beat the crowds up to the summit and score a few quiet moments on the peak. He loves this place, and just wishes it could get back to the way it used to be. He waves sympathetically at the Forest Ranger in the parking lot as he passes by.

A woman pulls into the same parking lot. Her hands grip the steering wheel as she tries to navigate the maze of cars. She works 45 hours a week and got a last-minute day off that miraculously lined up with the kids’ day off from school. She wants her kids to grow up with more of an outdoor experience than she had. It wasn’t easy, and it’s not easy now.

She grimaces at her partner as they pull into the parking lot full of white people decked out in what looks like $500 worth of outdoor gear, just from the waist down. It was an act of bravery to get here; the family has had bad experiences in rural towns, and any relief they felt passing a Black Lives Matter sign in Keene was negated by seeing a confederate flag. They won’t go into the towns. Just a nice hike and then back home to where everyone won’t stare.

There is a green truck in the parking lot that says POLICE in huge letters. Her husband glances at them nervously, then gets out and tries to get the kid’s things together. Neither of them had ever hiked much, but the parents made sure the kids brought their sneakers and a solid pair of pants. A man with one of those expensive packs and trekking poles stares at you as he walks by, then waves to the person in the police truck. You could have sworn you saw him shake his head.

Last summer I wrote an article titled “How Much is too Much?” about the impacts of high visitation in our parks, but I’ve since learned that I asked the wrong question. To figure out solutions to protecting the High Peaks Wilderness, first we need to fully understand what is threatening it on an ecological and social basis. Those threats might include some aspects of high use, such as improper disposal of human waste and trail erosion in sensitive habitats, but if we choose to only focus on these impacts we run the risk of fixing a leak in a dam that is about to burst.

Threats to the High Peaks Wilderness and Tri-Lakes region are multifaceted, and not solely ecological. In working to protect this idea of wilderness it can be tempting to try to “get back” to the way things used to be. The idea is that what “used to be” was true wilderness, and that what is here now is compromised for a multitude of reasons, including too many people. In some cases, the idea of a “wilderness experience” is being used to justify restricted access, an action that limits accessibility. If we really are to move forward, and take our wilderness areas with us, it is time we look forward and discover modern interpretations and management strategies for our wild spaces.

There is an approach in conservation biology called the “ecosystem-based approach.” The idea is that instead of putting resources into protecting one species on the brink of extinction, biologists put funding and efforts into protecting an entire habitat, so that the species will come back as a natural result of habitat protection. In doing this, all species that depend on a specific habitat will be protected. It prevents a repetitive cycle of efforts that are often too-little too-late.

By protecting entire habitats conservationists are able to prevent extinction before it starts to happen, we benefit species we didn’t even know were in trouble.

The management of the High Peaks needs to come from a similar mindset; if we only focus on ecological impacts without simultaneously addressing accessibility, diversity, and the vitality of our towns, we risk our own kind of extinction.

Other Ecological and Social Issues

At the core of the management of the High Peaks Wilderness is the Adirondack Park State Land Master Plan – which in turn was inspired by the Wilderness Act, a 1964 piece of legislation that defines wilderness as (paraphrased): “an area where the earth and its community of life are untrammeled by humans, where people themselves are visitors who do not remain.” It was a landmark act that aided in the protection of our country’s natural areas, and inspired many beautiful meditations on what it means to have a wilderness experience.

Yet this idea of wilderness is just one interpretation of how we can experience our wild spaces, and it would be naive to think it the only one. The instinct we have to limit access as a management solution comes from a place of privilege, and at its core is colonization. The narrative of “over-use” threatens to blind us to other ecological and social issues facing the park.

High-use is by no means the only ecological impact the park faces. If the planet continues to warm at its current rate, we could see the disappearance of all boreal and alpine habitat from inside the blue line. Things like trail erosion on heavily-trafficked hiking trails is generally restricted to a small corridor of land that has already sustained an impact. In places where these impacts are more serious, such as the alpine zone, the Summit Stewardship Program has shown that education is highly effective in curbing impacts.

I worry that if we focus so much on high-use we will miss the rising mercury levels in the blood of our boreal birds, and not be as concerned with the introduction of non-native species to our waterways and forests. That we might not notice when climate change reduces the vitality of our sugarbushes, and shorter winters threaten the winter economy of our snowmobiling and ski towns. The term “overuse” implies that we need to lower the number of people using the trails in order to protect the park, but the truth is we don’t really know that yet. More data is needed to determine how high-use is affecting our protected lands, and objectively focus on the ecological, sociological, and economic impacts as opposed to the idea of a wilderness experience.

The Importance of Diversity

I believe that the lack of diversity on our hiking trails and within our towns should be talked about to the same extent as the overuse narrative currently is. We must care as intensely about racism, homophobia and transphobia that exists in our towns and on our trails as we do about wilderness or the new AMR reservation system.

Worse yet, some folks claim it isn’t even a problem (trails don’t see color) or that they don’t want to get “political.” This often comes from a place of misunderstanding or lack of education, and I encourage everyone to explore websites like Melanin Basecamp (here is a great place to start). And as far as being Queer in a small town, here is an article that describes one person’s experience, and here is a link to my own article about living in Saranac Lake as a Queer non-binary trans person.

I love natural spaces, I love the feeling of wildness, and I would much prefer to live in a little cabin in the woods as opposed to a city. Unfortunately I just don’t feel safe openly being myself in Adirondack towns. That is not an uncommon experience for members of marginalized groups. In July, the director of the Adirondack Diversity Initiative moved out of Saranac Lake because she did not feel safe there as a Black person. We need to figure out how to make our towns safe, and be just as outraged at the lack of diversity and acceptance in our communities and on our trails as we are about parking and permits.

The Adirondacks have long been viewed as a unique example of conservation, a patchwork of public and private land where people live within the park. We have an opportunity to again be an example, a place that strives to create better access for underrepresented groups and put our efforts and our money towards education, staffing, and infrastructure to uplift our communities, provide more year-round jobs. We have an opportunity to listen to groups such as the Adirondack Diversity Initiative to give them more funding, to put people from underrepresented groups in management and leadership positions, and to work together to think of creative solutions to the management issues in the High Peaks.

If we have any hope of protecting our park and our planet, we need to involve everyone, and we desperately need perspectives that have been historically excluded. I think that means we need to change how we manage the park and stop trying to get “back to” an idealized vision of what once was.

Michaela Dunn
Michaela Dunn has spend the last three years as a summit steward. They grew up in the Adirondacks in Lake George and has worked at the Wild Center as a Summer Naturalist, as well as a Wildlife Tech for DEC. They graduated from the University of New Hampshire, majoring in Wildlife and Conservation Biology. Michaela enjoys exploring caves, finding joy on and underneath mountains. They have their own blog, writing about their hiking adventures and conservation issues.
Previous Post
Forty-Six: On the Occasion of the 2021 Presidential Inauguration
Next Post
Cotton Lake: The Wilderness No One Knows 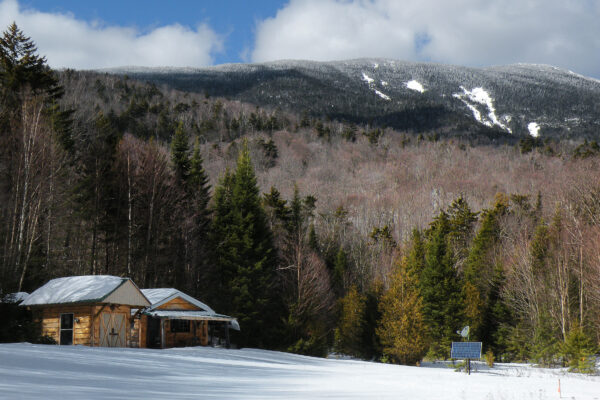 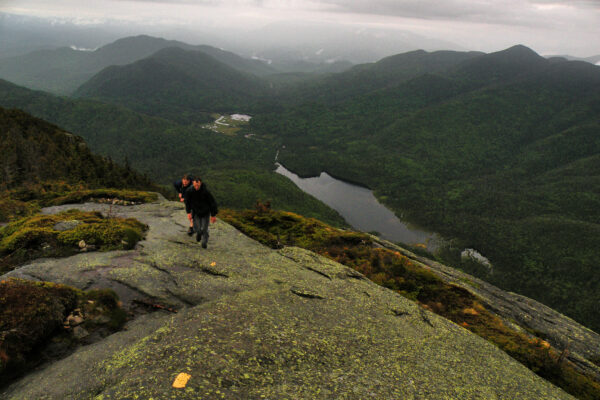 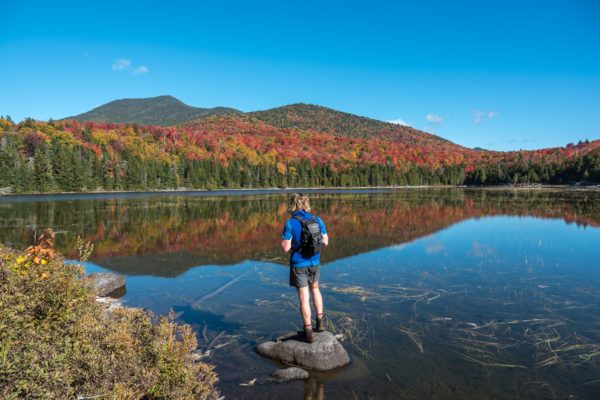 Protecting the Wilderness with Positive Reinforcement