Sometimes a great hike is hidden in plain view.

Years ago I snowshoed my way up Haystack Mountain near Ray Brook and remembered vaguely that I enjoyed the experience – but overcast skies obscured most of what was surely an exceptional view that day. Thus I was somewhat cheated by the weather, and the memory of my climb up Haystack got filed away among a host of other outdoor experiences.

And then Haystack became “that place” on the busy highway between Saranac Lake and Lake Placid often packed with cars at the trailhead – a hike that probably didn’t need my help to promote it. Plenty of people were finding it on their own, since the trailhead was so obvious and easy to find.

This winter, as I sought to re-familiarize myself with parts of the Adirondacks I haven’t seen in too many years, I decided to give Haystack another try. The weather cooperated with me, and I am now kicking myself for not paying closer attention to this excellent hike.

Before I get too far into this write-up, however, I should clarify that we’re not talking about Haystack the High Peak – one of the most rugged and most remote summits in the Adirondacks.

Instead, this article is about the 2874-foot summit of the same name to the north, a foothill of McKenzie Mountain near Ray Brook. Instead of being a High Peak, this Haystack offers a panoramic view of the High Peaks.

I classify this as a strenuous climb, on the basis of the steep final pitch to the summit, which is about as vertical as a hiking trail can get. There is also a “secret” approach to the summit that may not be much of a secret, but since that route isn’t marked and doesn’t appear on published maps, let’s stick with the main route.

The trailhead is located at the north end of a wide turnout on NY 86 midway between Ray Brook and Lake Placid. It would be difficult to miss; just look for the large parking area and standard-issue DEC trail sign. There is nothing subtle about this trailhead, by Adirondack standards.

The trailhead is the primary entrance into the McKenzie Mountain Wilderness. Marked with blue disks, the trail begins in a plantation of white pine and Norway spruce, leading northerly and even northeast before finally swinging west towards its destination. It traverses the lower slopes of Little Burn Mountain, through a forest of paper birch, poplar, and red maple — sure signs that a fire did, in fact, sweep this mountainside. On a gray winter day, the whites of the birches, the graphite gray of the full-sized aspens, and the snow all around can make the woods appear perfectly colorless.

You gain some elevation on Little Burn, but lose it all as the trail bears downhill towards Little Ray Brook. The trail intercepts an old roadway at 1.5 miles, forty-five minutes from the start, and then begins to climb in earnest beside the brook, following it northeast. After passing a set of concrete foundations on the right, and an icy gorge on the left, the trail forks.

Bear left for Haystack, soon coming to the crossing of Little Ray Brook below a concrete dam (an abandoned municipal water source). Now you begin to climb! The several steep pitches alternate with level terraces, until finally you are presented with the final scramble up the side of the summit knob. The trail is only slightly less steep than the surrounding rock walls, but by leaning into the slope and focusing on each upward step, you may find yourself on top in a matter of minutes. The last few minutes to the summit proper are comparatively mild – compared, that is, to what you’ve already gone through to get here.

From the broad clearing on top, the vista extends from the Sentinel Range across Lake Placid, to the Saranac Lake region to the west. Among the prominent High Peaks in view are Marcy, Algonquin, and the Seward Range. In the near distance, the cluster of buildings surrounded by an over-sized clearing is the former athletes’ village from the 1980 Winter Olympic Games. Though difficult to discern from this angle, each one resembles the five Olympic rings. The facility now serves as a prison. 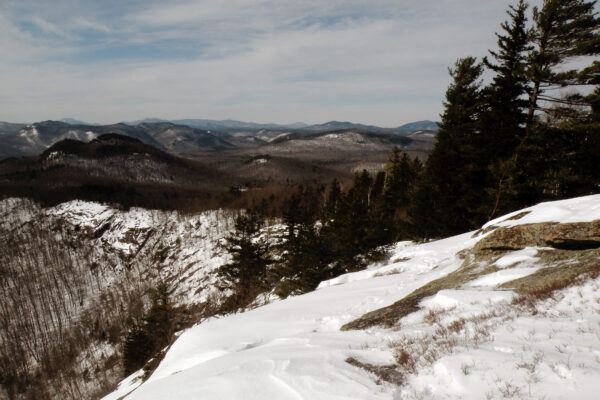 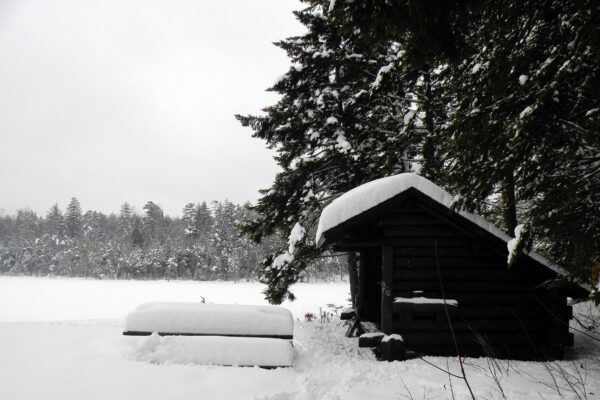 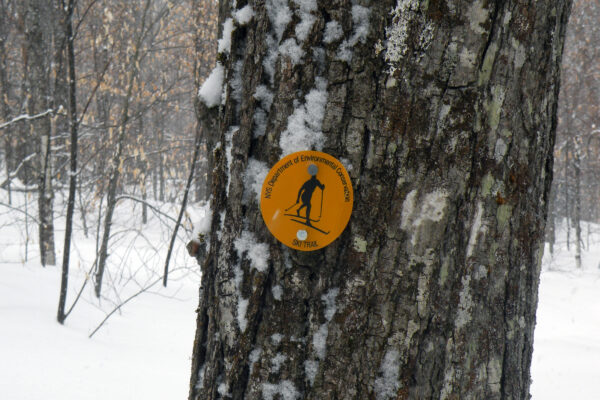