Planning for a Wilder Pepperbox

The NYS Department of Environmental Conservation (DEC) recently announced plans to revise the unit management plan (UMP) for the Pepperbox Wilderness, a relatively small and seldom-visited area in the western Adirondacks near Stillwater Reservoir. Although this part of the Forest Preserve is not well known to most people, I have spent a significant amount of time here over the years, and I have returned recently to help gather my thoughts on the status of this unique area.

A mere 23,800 acres in size, the Pepperbox includes a cluster of wild ponds and streams between the Beaver River and West Branch Oswegatchie River. There are only two marked trails in the entire area: one to Jakes Pond and one to Gregg Lake, both in the northern third of the area. The entire Pepperbox Wilderness is very lightly used, with some of the lowest visitation rates of any wilderness in the Adirondack Park. This is not to say that the area is a subpar wilderness not worth visiting; rather, it is probably a reflection of its out-of-the-way location and largely fishless waters.

A prior management plan in 1985 essentially proposed no changes to the state’s management of the area, and this plan has been in effect ever since. Perhaps the biggest change to the Pepperbox came in 2000, when a portion of the Watson’s East Triangle Wild Forest was added to the wilderness on its northern edge. Another momentous event occurred in 2018 when DEC stocked one interior pond for the first time after studies showed it had naturally recovered from the effects of acid rain.

I recently submitted comments to DEC on behalf of Adirondack Wilderness Advocates, Inc. As an organization, we hope that this process to revise the UMP will result in a Pepperbox that is wilder and better protected, with facilities that provide a more enjoyable user experience with less potential impact on the resource.

SUBMIT YOUR OWN COMMENTS TO DEC!

Read more about DEC’s management for the Pepperbox

Read a brief history of the Pepperbox Wilderness

No new recreational developments seem justified, including new trails or lean-tos. In our view, the low visitation levels of the Pepperbox easily justify the decision not to build any trails or lean-tos in the interior. The visitors who come to this place are deliberately seeking primitive and rustic experiences, and they are probably not dependent upon signs and markers to find their way around. The most “development” that may be prudent are primitive campsites at select locations, but otherwise we would prefer the Pepperbox to maintain its reputation for being largely undeveloped.

Existing facilities should be maintained to modern trail standards. To the extent that marked trails and other facilities do exist within the Pepperbox Wilderness, they should be well designed to enhance the user experience and better protect the resource. For instance, on my recent snowshoe hike to Jakes Pond, I was reminded how parts of that trail suffer from a substandard design, with numerous stream and wetland crossings that require sustained cold weather to be safe. While much of the trail would be attractive for ski touring, one section that climbs a long hill never freezes because of running water in the tread. The trail should be realigned to allow safer stream crossings and better drainage, while at the same time minimizing the need for bridges and other constructed features.

Replace the bridge over the West Branch Oswegatchie River. This structure on the northern trail to Jakes Pond, immediately south of the Keck’s Trail intersection, is currently wide enough to accommodate ATV traffic, and trail conditions do suggest infrequent but persistent ATV trespass on state lands. Because this bridge serves as the northern entrance to the Pepperbox Wilderness, a very simple and effective management solution would be to narrow the bridge and make it impassable to ATVs.

The Tied Lake Primitive Corridor should be closed to public motor vehicle use. This action will enhance the wilderness character of the area, which should be the primary management goal of this UMP. The Pepperbox is bounded on three sides by lands and waters that are open to motorized access and recreation, so opportunities abound for people who require direct motorized access. The recent development of a universally-accessible campsite at nearby Buck Pond in the Watson’s East Triangle Wild Forest obviates the need for motor vehicle access to Tied Lake.

The UMP should anticipate a future in which the inholding is acquired and no further private access is required; at that time, the State Land Master Plan (SLMP) mandates the road’s closure and reclassification to wilderness. Therefore no actions should be taken on this road that would negatively affect nature’s ability to reclaim the road should it eventually be abandoned; for instance, the route should not be widened, no parking areas should be cleared, and the surface should not be improved. Maintenance on the Tied Lake Road should be limited to the minimum necessary to keep it safe and passable for private vehicular access.

Inventory unmarked trails as Class I and II primitive footpaths. The southern half of the area is often described as “trailless,” but in reality this is not the case. All “ghost trails” (the local term for the unmarked, informal trails in this area) should be inventoried as Class I and II foot trails—meaning that some basic maintenance may be permitted, but the routes will remain unmarked and intermittent in nature. Undesirable trails should be closed, and the condition of those that remain should be assessed over time.

For many years there was low interest in this area because nearly all of the ponds had been rendered fishless due to acid rain. However, as pH levels naturally rise and places like Sunshine Pond are restocked with brook trout, DEC should anticipate a greater public interest in this area, which may result in greater public use in the existing “ghost trail” network, the creation of new trails, and impacts along shorelines.

The natural byproduct of an improved fishery is an increased incentive for anglers to seek out these waters, which in turn will result in a greater “wear and tear” on the surrounding resource. This is not necessarily a bad thing, but it will be important for DEC to make a detailed and frank assessment of the current condition of the wilderness, so that this information can be used as a baseline determination by which to judge all future impacts, should they occur.

Determine the status of the Alder Creek Primitive Area. DEC should issue a determination on the legality of the private use of motor vehicles along the Alder Creek Primitive Corridor. The SLMP states that the legal status of this right of way is unclear. This route is essentially an ATV trail, not a road as defined by the SLMP, and under no circumstances should public motor vehicle access be permitted. If the private claim of a right of way is deemed valid, an effective barrier that prevents circumvention should be erected at the wilderness boundary.

Relocate the Raven Lake Primitive Corridor gate. The gate at the beginning of the Raven Lake Primitive Corridor should be slightly modified to make it a more effective barrier against motorized trespass of state and private lands. Currently, there is a gap between the gate and the bridge over the Beaver River wide enough for a snowmobile to fit through, and in my direct personal observation snowmobiles use this route routinely. Presumably any person with a legal right to use the road would possess a key to the gate, and therefore the need to lock and unlock the barrier would be no hardship.

On my most recent visit in March 2019, I observed a party of 8 snowmobiles bypass the gate and ride all the way to Raven Lake, with some tracks venturing off the primitive corridor and onto an abandoned logging road within the Five Ponds Wilderness. These riders left after a short visit, but returned late in the afternoon and were still present in the backcountry as I departed the trailhead. As far as I could observe, these riders had no connection to the private camp at Raven Lake as there were no signs of entry to the building; instead, the interest of these riders seemed to be in “poaching” a trail that was otherwise off-limits to snowmobiles.

While it is difficult to design a barrier capable of stopping all motorized trespass, this is a unique case because the Beaver River never freezes at this location, and the bridge is the only way to access the wilderness, primitive, and private lands to the north. Closing the gap between the gate and the bridge would permanently ensure that only authorized individuals would be utilizing the road. 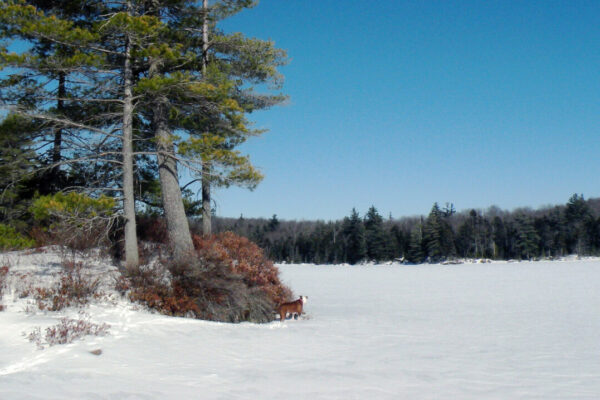 A Brief History of the Pepperbox Wilderness 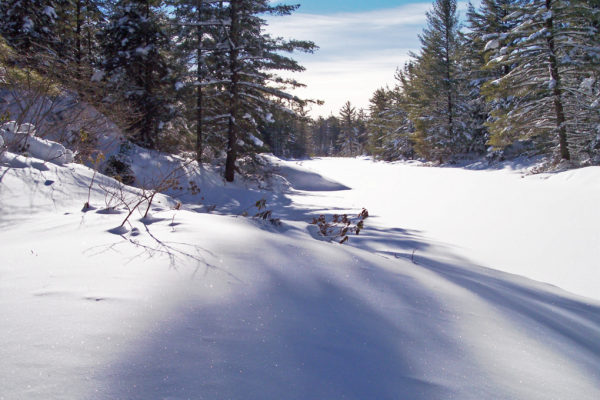